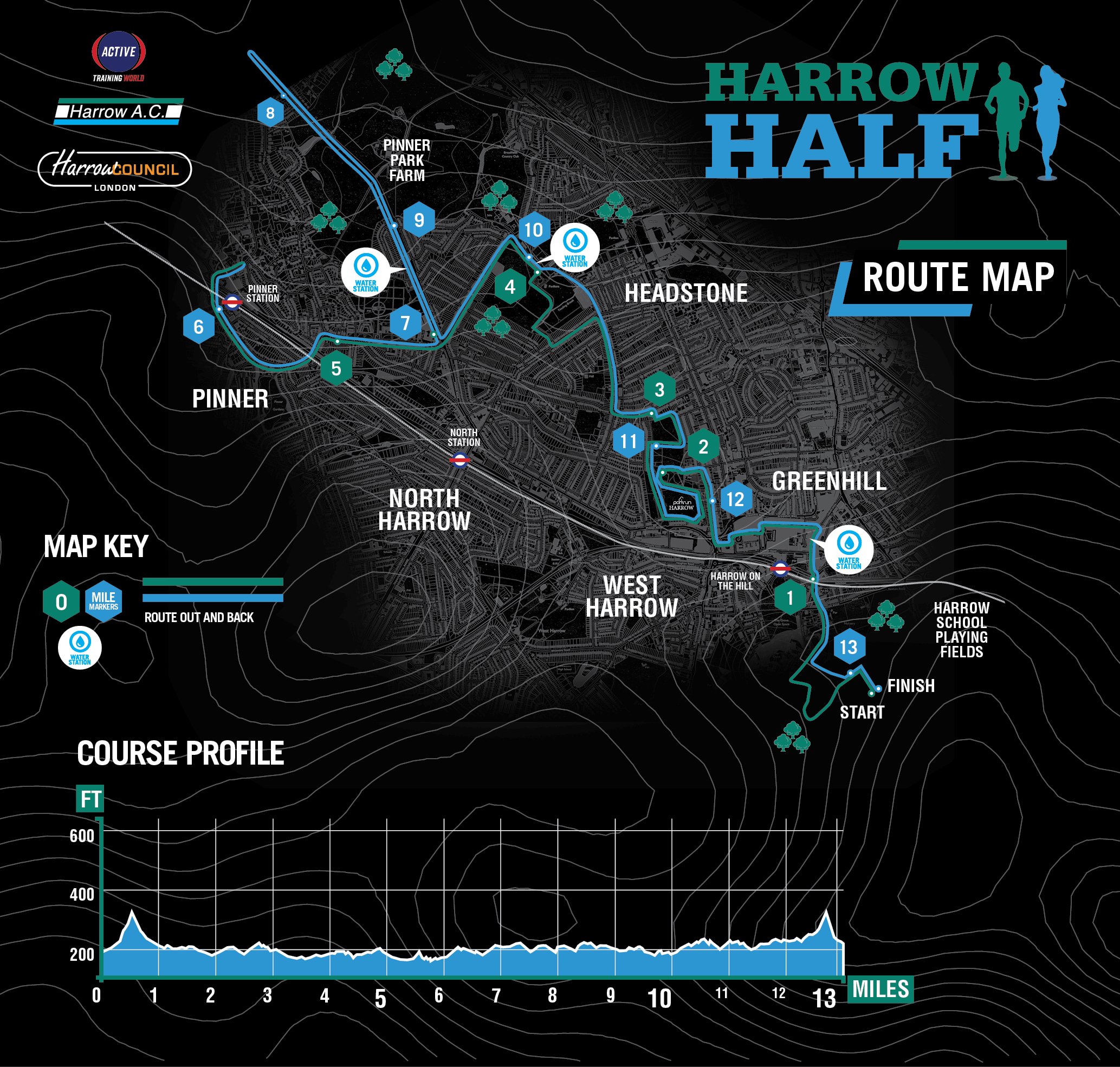 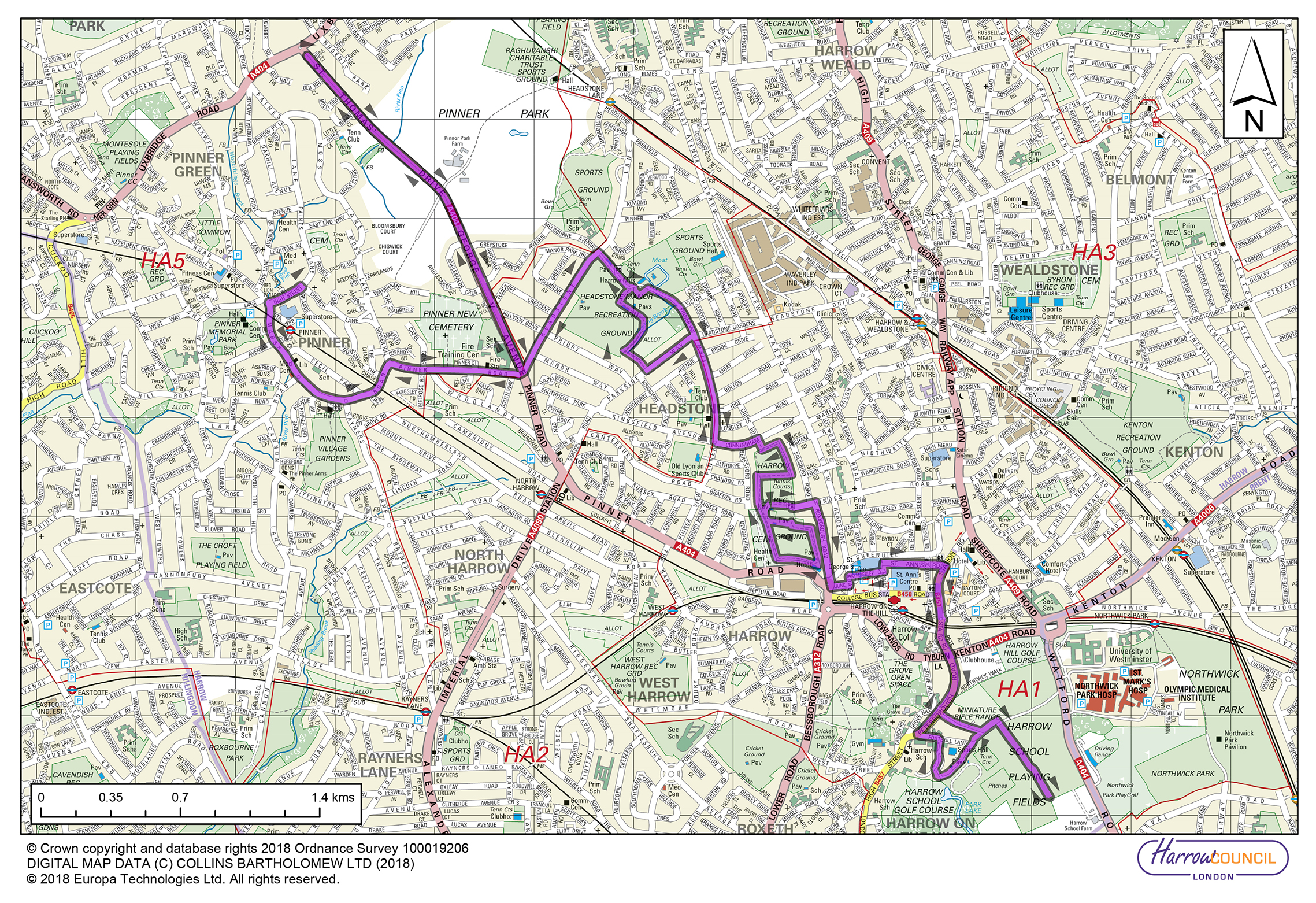 The ‘Harrow Half’ is organised by Harrow Athletics Club, which is based at the Bannister track in Hatch End and named in honour of the legendary Sir Roger Bannister. Sadly, he died earlier this year but was born and brought up in Harrow and went on to become the first athlete to break the four-minute mile in 3 minutes and 59.4 seconds.

The course features historic and well-known landmarks, stunning views, parks, countryside as well as the attractions you would expect of a modern, thriving borough and town centre. The race is fully supported by Harrow Council.

The journey begins at Harrow on the Hill with the start and finish in the grounds of the world famous Harrow School, founded in 1572. Follow in the footsteps of famous Old Harrovians, such as Sir Winston Churchill, Benedict Cumberbatch, James Blunt and more recently England Rugby Union internationals Maro Itoje and Billy Vunipola, and enjoy the spectacular views over London.

After snaking uphill through the grounds of the school, it’s then downhill towards HARROW TOWN CENTREalong Peterborough Road and Station Road with a left turn into the pedestrian precinct and the heart of the town – HARROW SHOPPING CENTRE, with the busy, thriving St Ann’s and St George’s shops.

From there, the course takes you via Roxborough Road into HARROW RECREATION GROUND, scene of Saturday morning’s weekly 5km parkrun.

Exiting at the top of the park, it’s on to Pinner View, Parkside Way and then HEADSTONE MANOR RECREATION GROUND with its centrepiece – the moated manor house. Built around 1310, it’s the earliest surviving timber framed building in Middlesex. More recently, there used to be a cinder track there on which Sir Roger Bannister trained in his youth.

Leaving the Manor, the route then heads west towards Pinner, passing Nower Hill School and the fire station. Pinner Road gives way to Marsh Road. We are in the heart of Betjeman’s Metroland and the bridge at Pinner Station. Passing underneath, the course takes a right turn and the historic PINNER HIGH STREET beckons.

Not only has it been the site of the annual fair since 1336 but has proved an attraction to tv and film companies over the years. The BBC series ‘May to December’ was set there and more recently scenes from the film ‘The Theory of Everything’ featured St John the Baptist church.

The church marks the halfway point of the course and runners will turn round and go back down the high street, turning left along Marsh Road once again passing runners going in the other direction.

Runners should not be surprised to experience a shiver down the spine once they pass the junction with Eastcote Road. They’ll be running in the footsteps of those who ran in that famous first ever Olympic Marathon held in London in 1908.  The distance run that day – 26 miles and 385 yards – set the standard used ever since. Competitors that day turned right after the fire station whereas Harrow Half runners will turn left up George V Avenue.

The countryside looms and it’s not long before you’re surrounded by the fields of PINNER PARK FARM.It started life as a Deer Park, some 750 years ago. Today it’s home to some fine, prize-winning Aberdeen Angus cattle, bred by one of our sponsors, O’Hara Bros.

It’s about turn again at the top of St Thomas’ Drive, back down to the school followed by a left turn up to and through HEADSTONE MANOR RECREATION GROUND again before revisitingHARROW RECREATION GROUND for the final time.

From there, it’s but a stone’s throw to HARROW SHOPPING CENTRE. The end is not far away and the route goes straight down the pedestrian precinct before turning right.

Time for runners to focus on the final stretch, heading along Station Road and up Peterborough Road and taking inspiration from looking up to the highest building in Middlesex, the spire of the thousand-year-old St Mary’s Church; the final landmark close to where they started the HARROW HALF MARATHON.

The traffic closure times will be earlier. Reopening will follow shortly after the latest times.
Harrow Half Marathon – Detailed Information on Areas of Traffic Disruption